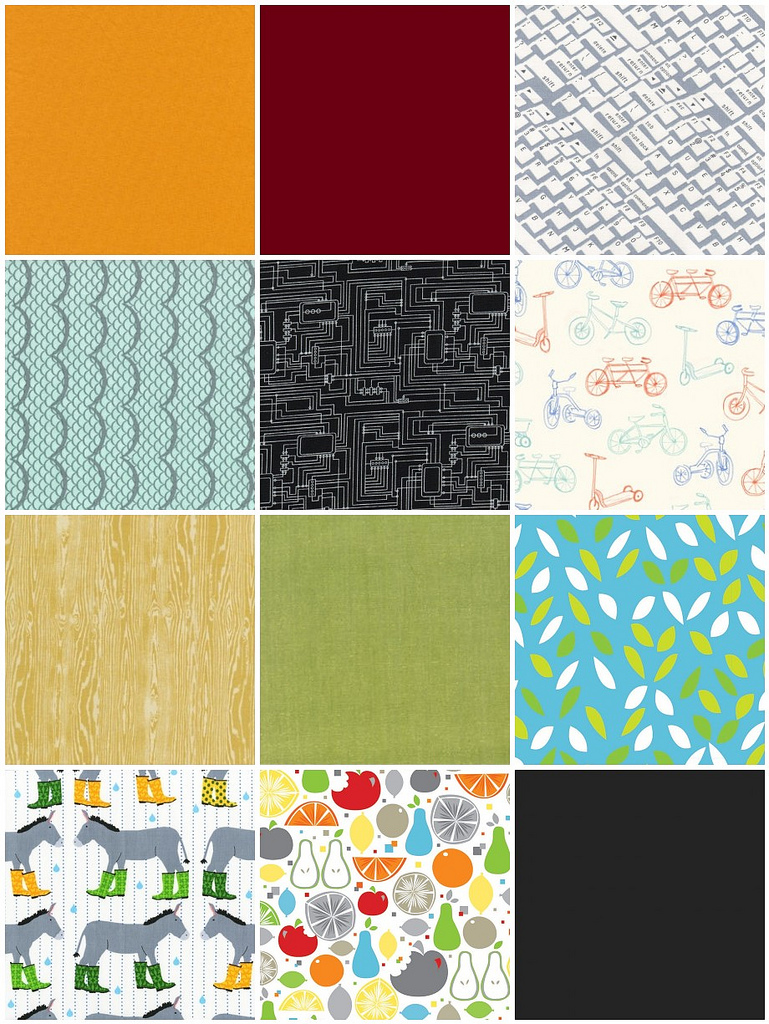 So, over at i’m a ginger monkey, Katy is hosting a fabric bundle contest, with the gracious sponsor Brenda of Pink Castle Fabrics. There will be two winners of the contest, and they will not only get a Fat Quarter Bundle for themselves, their fabrics will also be sold as a bundle in her shop as well! Pretty awesome I think.

I have The Hunger Games on my mind, so I figured I would create a bundle based on the 12 Districts. (If you have no clue what I’m talking about, please stop living under a rock) Each district creates a specific thing for the Capitol, who rules over Panem. The synopsis of the book and movie is below:

In the ruins of a place once known as North America lies the nation of Panem, a shining Capitol surrounded by twelve outlying districts. The Capitol is harsh and cruel and keeps the districts in line by forcing them all to send one boy and one girl between the ages of twelve and eighteen to participate in the annual Hunger Games, a fight to the death on live TV. Sixteen-year-old Katniss Everdeen, who lives alone with her mother and younger sister, regards it as a death sentence when she is forced to represent her district in the Games. But Katniss has been close to dead before-and survival, for her, is second nature. Without really meaning to, she becomes a contender. But if she is to win, she will have to start making choices that weigh survival against humanity and life against love.

Acclaimed writer Suzanne Collins, author of the New York Times bestselling The Underland Chronicles, delivers equal parts suspense and philosophy, adventure and romance, in this searing novel set in a future with unsettling parallels to our present.

Each of the twelve districts produce or manufacture a specific type of item for the Capitol. The contest calls for us to pick 12 fabrics, so this was perfect! Here’s my Mosaic:

Anyway, starting at the top from left to right and going down, here are my fabrics and their corresponding district:

2. Kona Cotton in Rich Red. District 2 is the Masonry District, so I picked a deep red to represent bricks.

3. Keyboard in Gray by Timeless Treasures. District 3 is the Technology District, so I felt it fitting to select a keyboard print. Computers = Technology in my book!

4. Waves Mist Salt Air by Cosmo Cricket. District 4 is the Fishing District, so I figured it would be appropriate to find an ocean/fish scale fabric.

5. Circuit in Black Mechanical Genius by Mo Bedell. District 5 is the Power district. I initially picked this print for district three, but once I saw that district 5 was power, I thought it fitted better for this particular district.

6. On the Go in Aqua Sara Jane Studio Children at Play. District 6 is the Transportation District. So, I picked a bicycle print. They are a mode of transportation after all!

8. Moda Cross Weave Woven Fabric in Wasabi. District 8 is the Textile District. I had a tricky time figuring this one out because there really wasn’t any fabric in Brenda’s store that represented textiles. So, I picked the crossweave because the weave and wefts are done in two different colors, and I figured that it would really emphasize textile industry by showing a noticeable weave in the fabric.

9. Seeds in Turquoise Fruit Slice for Anthology. District 9 is the Grain District. I picked these mostly because they were seeds.. and I’m sure that some grain seeds are shaped like the ones in the fabric.

10. Donkey in Grass Jack and Jenny by Laurie Wisbrun. District 10 is the Livestock District. I consider Donkeys to be livestock, although I’m sure the Donkeys in District 10 don’t wear wellies…

11. Fruit in White Fruit Slice for Anthology. District 11 is the Agriculture District. Since District 9 covers grain, I figured District 11 covered everything else. The female tribute from 11, Rue describes how her being small statured is beneficial since she’s able to climb trees and reach the smaller branches at the top to pick fruit. So fruits it is!

12. Kona Cotton in Charcoal Gray. District 12 is the Coal District. The color charcoal is pretty close to coal, so I figured it would be a good pick.

Well, there’s my bundle! It’s for the most part light-hearted and fun, although the books have a darker theme to them. Either way though, I think it’s a good representation of each of the districts. I’m excited to be going to see the movie in the morning!

One more thing, if you’re a fan of The Hunger Games, you can go to TheCapitol.pn and discover what district you’ve been assigned to. I got assigned to District 6, and when I told my husband, his response was “You’re from Detroit!”. Silly Jeff.