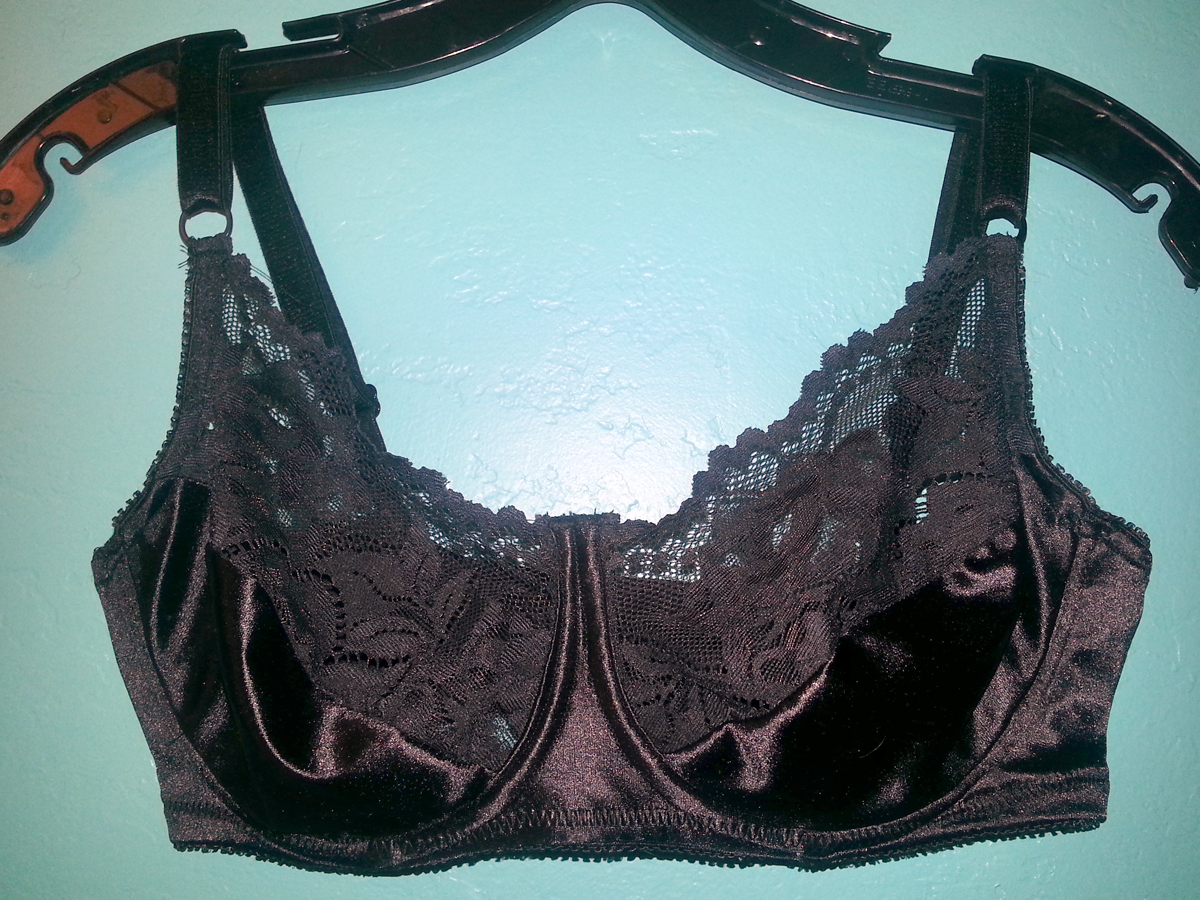 Well, it’s done! I’m excited and feeling rather accomplished that my first completed sewing project of the year is a BRA!

And of course, here it is on a hanger.

It’s not perfect; I’ve noticed that my projects for the first time typically aren’t. I’ve also learned quite a bit about my breasts as well, so I guess that’s always a bonus. But it’s wearable, and I think that was a big accomplishment in itself!

Now onto my thoughts about the process.

Bra making threw me for a CRAZY curve. I am not really fond of sewing curves, and that’s probably what makes up about 70% to 80% of this process. I had to use a TON of pins, and had to really take my time, and I unfortunately messed up quite a bit; the process probably took me a total of 6 hours between reading, and testing and sewing and undoing stitches and redoing them. Don’t get me wrong, I absolutely loved the challenge! Hopefully next time though, it’ll take me less time.

This is one of those things that I am not really comfortable recommending to beginning sewists unless they have a ton of patience, a very clear understanding about alterations because let’s face it… this pattern calls for a very pointy cup, and not all of us can A) fit into a pointy shaped bra and B) would WANT to wear a pointy bra even if we did. I actually made a video on how to make this alteration; it’s pretty quick once you have it figured out.

Now, to be honest, while the bra looks pretty and whatnot, I actually made a ton of mistakes; thankfully, it’s one of those situations where it really doesn’t matter because it gets worn under my clothes. The biggest thing for me was underestimating my cup size, and ordering wires that ended up being too narrow. I won’t show the pictures here, but the wires are actually somewhere between 1/4″ and 1/2″ too narrow; they need to go further back on my side to properly encase my breast tissue. The band is also a bit loose too, and I think I would probably end up being rather uncomfortable with the wires if the band was any tighter. Not a big deal for me since it’s my first one and it’s bound to have fitting errors. I also did not realize since I was using lace for the top, I didn’t realize I would need to offset the patter piece to allow for not needing a seam allowance for the top part of the cup; so it’s kind of too full of a coverage. No biggie, it works great under crew neck tshirts! But for something with a lower neckline; even a modest scoopneck, the lace will be peeking up over the neckline of tops. And I think the biggest mistake is that I probably sewed the wires in backwards.. but it’s entirely possible that the wires were sewn in properly; I’m having a really difficult time telling. I think I would prefer wires that were more for a plunge style bra, and therefore make a plunge style bra; but of course it’s all relative. I may also do a partial adjustment band to save on the strap elastic; and Amy on her blog posted how to convert a pattern from horizontal seamed cups to vertical seamed cups… and this is something I’m actually interested in since I prefer that look anyway.

I’m really grateful for the sew a long, and I’m looking forward to taking what I learned and making more bras.. and I may even explore the possibility of making my own matching knickers too!