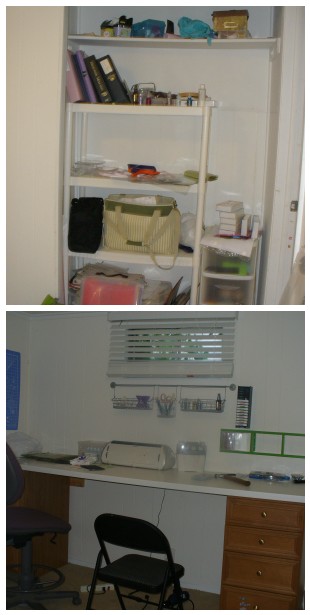 No, there’s not a personal significance with today’s date for me. Not yet anyway *wink

I’m finally feeling like my old self again after struggling with Post-partum Depression and finally getting help (7.5 months after having a baby) I’m now back to blogging and even sewing after a week or two of getting used to my medication. I knew I hit a low when I no longer felt like sewing anymore; quite sad really!

So, first things first. Part of the problem with not wanting to sew wasn’t directly related to my PPD, but it was mostly due to having a hot mess of a sewing room with fabric EVERYWHERE. I couldn’t find anything and it was typically all wrinkly and balled up under 20 gajillion different things. Not being able to easily find anything put a serious damper on things. I currently have two rooms dedicated to my crafting and creating; and my eventual plan is to consolidate them into one room, and turn what’s currently my sewing room into a guest room. I know some people are thinking either “What a brat, I don’t even have one room, much less two.”  or “Woman, you’re crazy to give up a room!” but it really comes down to simplifying my life, organizing and decluttering. With my papercrafting and sewing stuff sharing a room, I’ll be better about what I bring into my house and hopefully that means spend less money*.

Not 100% sure how I’m going to do this, but on the opposite wall of the countertop, I’ll put Olga there as well as my $20 IKEA sewing table that’s currently in there. We need to replace the socket on that wall though because when you plug something in, it falls out. Luckily my neighbor is an electrician, so he can come over, show us how to do it once, and we can do it ourselves in other rooms. And since I have a new computer, I’ll be able to put my laptop in there to watch tutorials or movies or whatever when I’m sewing. I’m also going to take the plastic shelving out of the closet, replace it with something else and we can use the plastic shelf for something else. Better start looking for ideas on Pinterest!

However, this consolidation is probably another few months out. In the meantime, I’m sorting through my fabric stash, ironing and folding and putting my fabric into a plastic bin as temporary storage.

This isn’t including my scraps, pieces that are too large to be scraps but too small to ruler fold and precuts and of course my trade/sell pile. I’ve still got quite a bit of fabric I need to iron and fold that’s going to stay in my permanent stash. Luckily I’ve got another 2 of these bins, plus an under the bed bin that I could put fabric into. This isn’t meant to be long term; however it’s good for now until I can merge rooms. It’s keeping my fabric nice and neat, and of course it’s easy to see what is there. I’ve got a rough system going on with sorting and organizing, but eventually, I’ll do some finetuning. Either way I’m excited at the prospect of having my spaces simplified! And of course this will be giving me a fantastic incentive to finally start using my business license and making things to sell. BTW, does anyone know how to get glitter out of french terry fabric? (don’t ask)

*That was actually for my husband’s benefit; I don’t know if I’ll actually be saving money but it’s a nice thought.