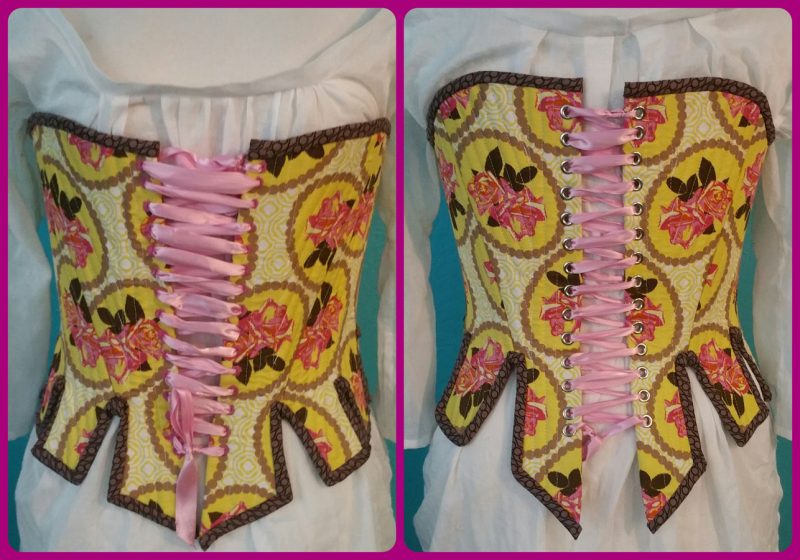 So, one summer back in 1998, I was introduced to the Outlander book series, written by Diana Gabaldon and I was immediately hooked; even if the content of the books weren’t -and probably still aren’t- suitable for an almost 13 year old to read. But I was mature for my age, so it was okay.

So, fast forward to early last spring, I came across a blogger/shop owner who had a tutorial that I was interested in and after poking around on her blog and liking what I saw, I went and followed her on Facebook. Then Lauren announced that she had made a set of sewing patterns for Simplicity based the TV adaptation for Outlander. (!?!) I then of course checked to see if Simplicity sewing patterns were on sale at Joann’s and when I saw that they were, I went and bought both of them (and probably a few other patterns) the next day. There’s two separate patterns; one for the under garments, and then the outer garments. The undergarments pattern number is 8162.

Fast forward a bit to shortly after Halloween; that’s when I decided to start sewing my Outlander undergarments, which was a bit odd considering I hadn’t watched the show. It almost feels odd making a costume based on a show I hadn’t watched yet, but considering I’ve been a fan of the books for about 18 years at that point that the show’s based on, I really didn’t care. Plus, I’ve always had an affinity for the 18th century anyway since I grew up near Williamsburg, VA so it pretty much reignited my passion, especially after moving to Utah where they are all about Pioneer Treks and stuff; which happens about 100 years later.

So, it’s a pretty straightforward garment in terms of pattern pieces; there’s just 5 pattern pieces, but you use each of them twice since you have to get a left and a right side. The instructions call for an outer fashion layer, an inner strength layer and the lining. Sometime prior to starting this project, I saw someone else’s stays on a corseting facebook group, and she recommended doubling up on the strength layer, so when I  started this project, I decided to follow her advice.

So, I followed the sizing guide on the back of the pattern and determined that size 14 would be my best bet; mostly due to having a 35.5″ bustline although my waist and hips put me me smack dab between the 12 and 14 sizes. The stays themselves are drafted with negative ease, so that allows a bit more flexibility for the final fit. I also omitted the shoulder tabs (the 5th pattern piece) since I discovered that these would be useful under some Game of Thrones dresses, and I also didn’t feel like fiddling around with the straps my first go around with this pattern. Oddly enough, cutting went fairly quickly. I cut the pieces, working from front to back.

After each round of cutting out the sections, I would set aside the lining fabric and then hand baste the rest of the layers together. my original plan was to cut all of the pieces out, baste the layers together, and then start on sewing in the channels for the bones, and then sew the pieces together, but I ended up getting impatient part of the way through and just went against my plan. It did help doing this though, because i was able to butt the foot up against the seam and use that as a guide. Somewhere between cutting out the side back pieces and the center back pieces did I realize that the top edge did not quite flow together. Thankfully I caught on and was able to determine that they were 4cm too tall, and I was able to trim them down.

Here, you can see that I’m in the middle of the trimming down process. I was a little worried that this would be too unsteady at the top, but it ultimately worked out well enough, considering I’m rather short torsoed -and let’s be honest here, short in general. Once I had all of the pieces cut out, basted, trimmed down, channels sewn, I worked on the tedious business of cutting the boning out of the cable ties and then sanding the cut edges down. I think I ended up with a total of 76 to 80 bones? Not entirely sure. I then finger pressed the seams open and hand stitched them down; although on the lacing edges, I ironed them down, being careful not to melt the bones that I had already inserted.

Then it was time to sew in the eyelets which, was not fun at all. I had these grand ambitions to hand sew all of the eyelets, but after the seventh one on the front, I decided to get grommets to do the back and just continue with the front with the handsewn eyelets. This was a lot of work and extremely time consuming and also painful on my fingers. I ended up doing a trifecta of thimbles to save my fingertips. It worked really well.

I used pink silk thread for the eyelets on the front, and then for the back I used sized 00 grommets and washers. I could have bought eyelets that were smaller and more to my taste, but I wanted the washers. I recently discovered that if you set the eyelets where the split part is on the right side instead of the wrong side, it works better that way. I did also find a source for smaller grommets with washers, so I can purchase those and go from there. I did not cover my back washers with thread, which is something I may do at a later date.

The binding was also frustrating. I sewed on the binding like I do for quilts, and while it works great for quilts, it’s not so great for when you have to go up and down tabs. They got weirdly bulky and difficult to sew, particularly in the dips of the tabs, and I snapped my thread quite a few times. I actually ended up getting frustrated with the project and set it aside for a couple of weeks, started on a different one, and then finally went back and finished the tabs. The most frustrating part of sewing the tabs I think though was the fact that I was using cheap needles, and broke three of them. The pack of needles came from the Dollar Store and I think I may have bought them when my oldest was a baby, before my middle child was born.. which was quite a while ago. They served their purpose though and I got through the project just fine. I did also recently buy a new pack of needles not from the Dollar Store, and hopefully these new ones will be less prone to breaking.

But eventually the stays got done, and for what they are, I am very happy with them and I feel extremely accomplished having finished this particular garment! Greta my dressform is currently wearing the stays over the chemise, which I’ll blog about next. I’m currently battling strep (again) and once I’m not sick, I’ll put them on and get pictures.

However, I’m not 100% happy with them, so when I remake the stays, I will be making some changes.

So, if you’re interested in learning more about this pattern, and the lovely person behind it, go to Lauren’s blog and check it out! She shares a lot of useful information about the 18th century and honestly, her blog has helped rekindle my love for this era. She also blogs about other time periods, so there’s something for everyone.