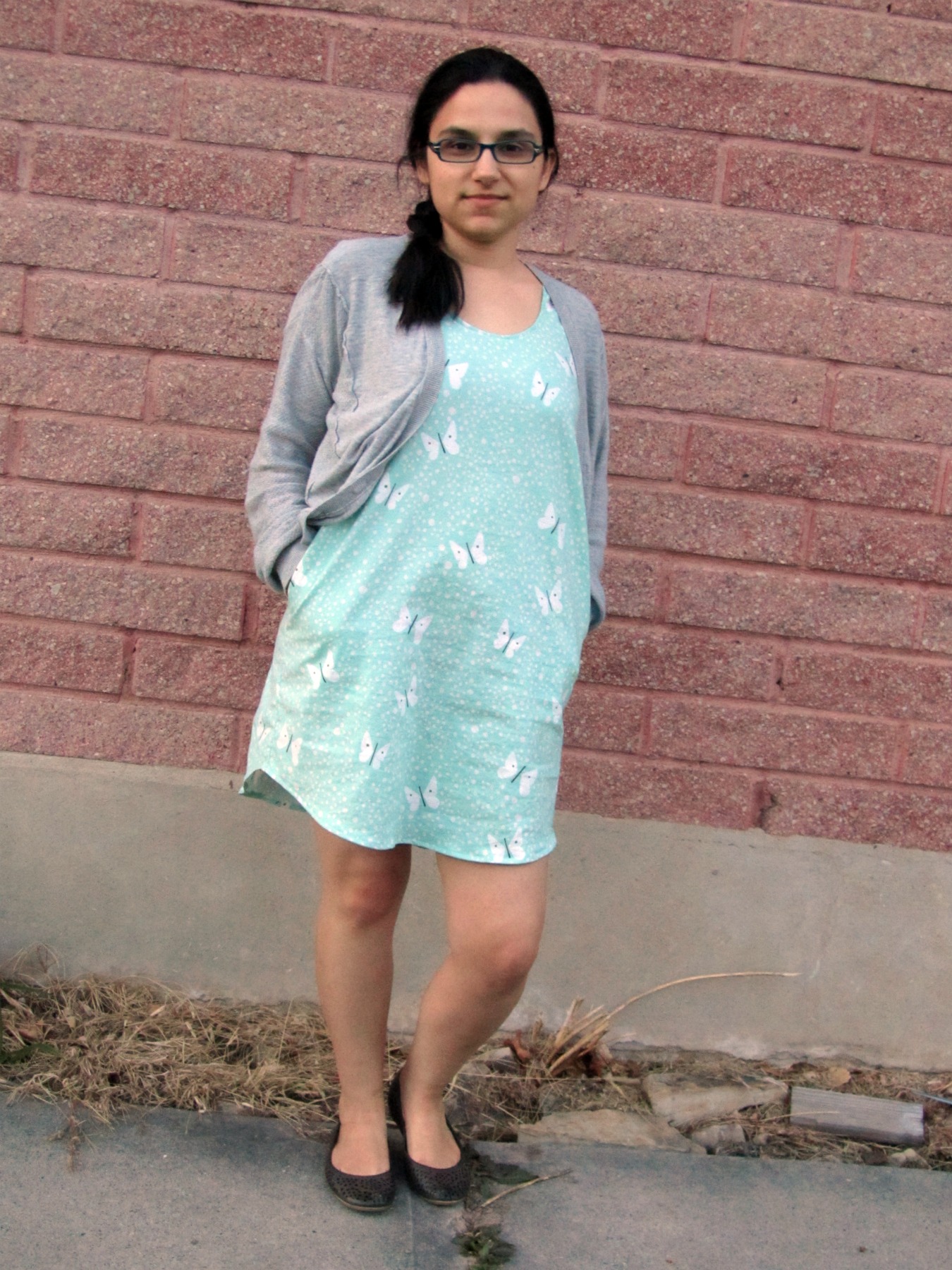 So, there’s been this top that’s been going around the blogsphere that’s pretty popular to make, called the Tova. It’s really adorable, and I’ve seen a ton of examples, but the pattern price was steep, like $30 and that was because the designer, Jenny had to hand-draw each pattern. Then sometime around two weeks ago, one of the sewing folks that I “Like” on Facebook mentioned the patterns are now available via PDF download. Sweet! I didn’t realize when I clicked on the link that she actually had two patterns available, the Tova top and then the Tank top/ Dress pattern. So I bookmarked it later for a someday project. Well, then someday came last week, and I purchased the tank/dress pattern. It’s spring so I figured to purchase a pattern for an item that I’ll be able to wear for the next few months. I decided to make a dress because lately I’ve felt I need to bring more dresses and top/skirts into my wardrobe. I’ve been having a difficult time finding dresses that I both like and won’t break the bank, but it’s been difficult. So I decided I should just start making them instead!

Immediately after purchasing the pattern, I decided that I was going to make the dress out of Lizzy House fabrics.. there was no question there. Since Jeff was at work, and the last couple of items I’ve made myself he wasn’t a fan of, I decided to ask for his opinion. After he narrowed it down to two of her prints, he liked I decided to get Butterfly Sky in Green from her Hello Pilgrim line. I got the fabric last Saturday, and then finally on Monday I was able to sit down and start constructing the pattern to start making the dress.

I ran into a number of problems, although nothing too major that couldn’t be worked around.

There’s one more issue I have/had but I’ll address that at the end of the post, after the pictures.

There were some good points though:

The pattern is easy to cut out, and easy to follow. I was also able to successfully add in pockets! After searching for what seemed like forever I found a tutorial on Craft Gossip by Jess of Craftiness Is Not Optional for adding in seam pockets to a dress or skirt.. and it even included a free pocket pattern pdf download. It was way easy to include the pockets! I actually left them on when I picked out the seams and cut off the excessive fabric from the sides, and then cut them off via rotary cutter and reattached them. I was nervous about french seams with the pockets, but it ended up being painless.

It doesn’t take that much time to make. It being my first time, it took me 2.5 naps to complete, and this IS including having to take out the seams twice. The second time I only took the seams out from the pockets down, since the pattern calls to use French seams, and the frayed cut edges were poking out of the second set of stitches. Not attractive. I did however omit the breast pocket, since I have no use for one.

And here’s one without my sweater:

Here’s the weird issue I’m having. I don’t know why, but the back of the neckline poofs up. I pinned it super carefully without stretching the fabric, and I even lifted up the shoulders by half an inch, but this still happened. I’m going to have to figure out how to get it to lay flat; I’ll probably pleat it down. I did prewash my fabric, but I’ll try to wash it again and see if that helps. I don’t think it takes away from the dress by any means, but it does annoy me. By the way, if anyone has any insight or tips as to why this happened, that would be greatly appreciated! I recognize it might just be my narrow shoulders, but then again I don’t know.

I LOVE the dress. It’s cute, and perfect for my body shape and it’s so springy and will translate well into summertime as is, and early fall, especially with a long sleeved shirt. It’ll be easy to accessorize too; I’m thinking to buy a skinny belt (or even make one) to wear as an empire waist. But then again, it’s perfect -neckline issue nonwithstanding- and I will totally be making more.

*For the record, I was not asked to endorse Hawthorne Threads. I bought the fabric from their shop and figured I would just link to the fabric I purchased. Of course, you can see it anyway in the pictures.