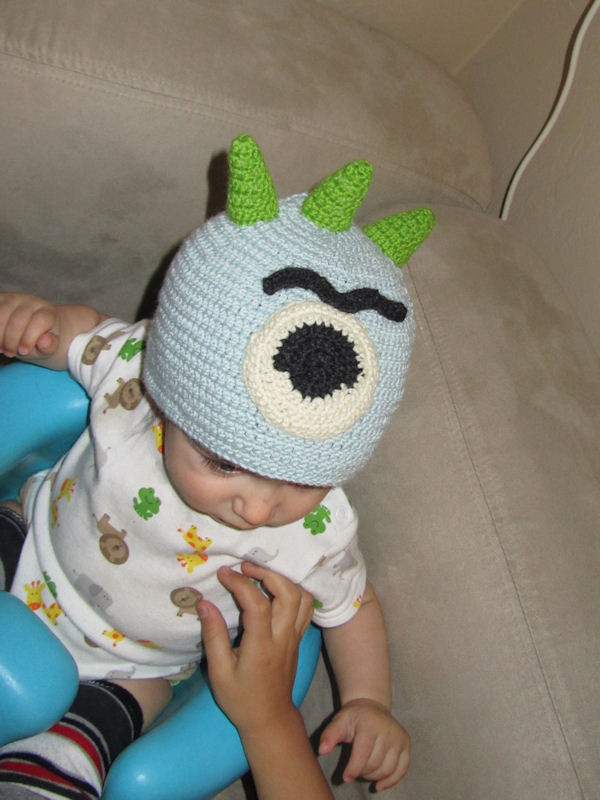 I typically cycle through my various crafting hobbies, and when the weather gets cooler, I bust out the knitting needles and start knitting up hats. However, this time around I busted out a crochet hook! (well, I had to buy one since I didn’t have the right size) Initially, I was going to knit Oscar a Stella Pixie Hat by Kristen Rengren (I actually made Zoe one), but one day browsing through my blog reader, I had come across a post on The Boy Trifecta where Emily did a guest post/tutorial on The Train To Crazy for the Handmade Dress Up Series that’s being done over there. Initially, Emily only had the tutorial on The Train To Crazy; however as of today it can now be found on her blog.

Here’s the hat she made:

Now here’s the thing. I learned how to crochet first, but I typically prefer knitting, mostly because I like the tightness of knitting. One of my biggest pet peeves is seeing knitted and crocheted projects with open spaces.. now this is permissible with lacework but not with your typical knit/purling or various crochets. Besides, I was inspired to pick up the crochet hook since watching the Crochet School series by craftyminx. Man I’m sure namedropping today! Now, I have to say this about Dana (craftyminx) she’s dedicated. She’s not only taken the time to make her videos, she’s taking the extra mile and flipping them so lefties can learn how to crochet too. As a leftie myself, this is Uh-may-zing. I wanted to learn how to crochet initially when I was 9, unfortunately the only person I knew that could crochet was my Aunt Mary who’s right handed. She couldn’t do anything more than teach me how to chain stitch, and I had to wait another 6 years before I was in my sophomore year of High School and I got a book out of the school library that was dated back to the early 60’s and figured out how to crochet at that point. So, even though I already know how to crochet, it’s still refreshing and fun to watch Dana’s videos. It inspired me to crochet the monster hat instead of  knit it!

So back to Oscar’s hat. Emily in her tutorial called for a Worsted Weight yarn; however since I had purchased the yarn for Oscar’s hat with the intention of making a different hat, I had bought a thinner yarn that’s more of a Sport weight yarn (look here if you want to know what I’m talking about) Instead of buying a different yarn, I just used what I had! I went back to my favorite yarn shop and bought more colors as well, since I didn’t have any other yarn in the proper weight.. gotta keep it proportional. Because of the thinner yarn, I ended up not being able to follow the exact tutorial for crocheting up the actual beanie but I was able to follow the same concept. In addition, I decided to make the pupil of the monster eye a bit differently.. since you know monsters have weird eyes*. I did the same number of spikes, but because I wanted them to retain their shape I stuffed them with wool roving. And I made an eyebrow! I love the eyebrow, since I shaped it to look a bit grumpy. His name is Oscar after all. And I also did not make the mouth.

From what I can tell, the hat’s been a huge hit! I’ve gotten a request to make a hat for someone who wants to pay me for it, but I need to get permission from Emily before I do that. Even though it’s not exactly following her tutorial, it is close enough and based off of her tutorial that I’m not comfortable with doing it nilly-willy. I think the thinner yarn was actually perfect for Oscar.. in my opinion you kind of need to scale your yarn choices to the person you’re making the item for. A super bulky yarn I don’t think is ideal for a baby item! I made the hat slightly large; however it’s going to be his winter hat so it needs to grow with his head.’

*yeah, I know that monsters aren’t real, but who gives a crap?