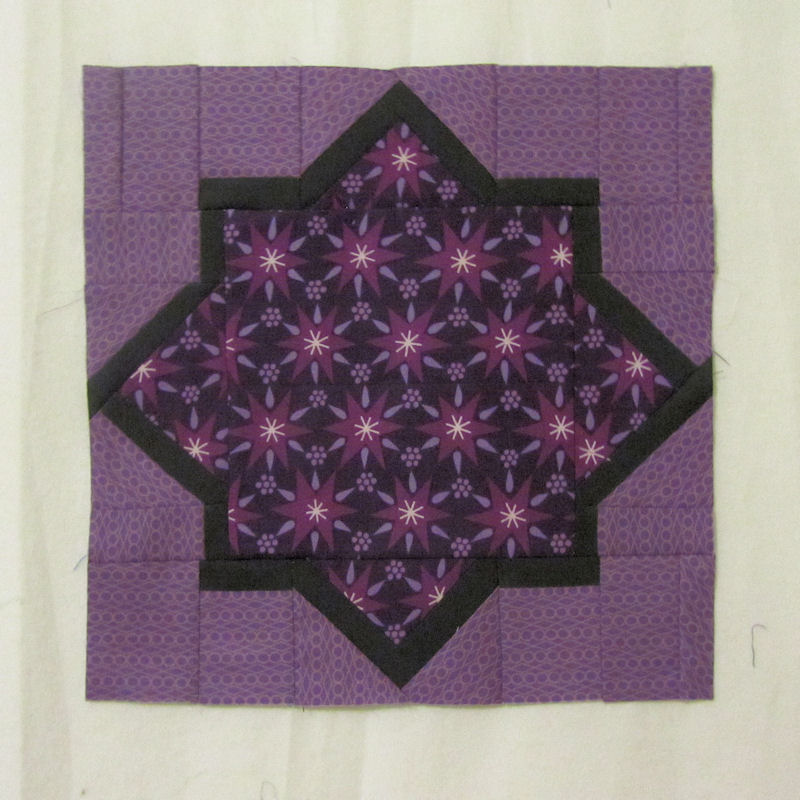 So, I’ve been neglecting my blog a bit, but I’ve been busy! I’m currently signed up with FOUR swaps. Yes, FOUR. I must be nuts! I’ll discuss them in the order that they are due by.

The first one is a Sewn Spaces swap; more specifically, we are swapping needlebooks. I’m pretty excited about this one since my partner’s mosaic has been quite a challenge, but I think I’ve got it! I have just one more thing to sew inside of the needlebook, and then I need to figure out how to make it close and then add binding, and it’ll be off to go! I’,m obviously not going to share my partner’s Mosaic, but here’s mine: If you click on the picture, it’ll take you to my flickr account, and you’ll see my notes on each of the pictures. I really LOVE leaving notes on each of my pictures, so I can share with people what I like particularly about the picture, if it’s color, or motif or fabric choices or methods. This swap is due to be mailed out by July 30th.

The next one is actually round two of the “Pretty {little} Pouch” swap. I had done this one previously, and I felt like signing up again. Not that I don’t like my pouch, but more pouches the merrier! Plus I have a stash of fabric I need to work my way through, so it’s nice. And besides, I like making things for other people! I just barely got my partner and I’m WAY excited to be making a pouch for her; we kind of go around in the same ‘circles’ so to speak, and I’ve admired her work and creativity, so it’s nice to finally make something for her! This swap is due on August 8th. I almost did not sign up for this one since it was the latest one I signed up for, but I felt like because my needlebook was coming along a lot quicker than I thought it would, I figured it wouldn’t hurt, and I’d be fine with the deadline.

I’m actually excited about this next one. The next one is called the “Make Mine Modern” swap. This one is a bit more vague… because when you fill out your form, you kind of just list things you’d like your partner to make, and then they go ahead and make it for you. In addition, you also have to send them 1.5 yards of fabric that they have on their wishlist or what you’d think they like. My partner that I have for this swap is surprisingly easy after I spent time browsing her blog; I found the original tutorials of some stuff she liked in her mosaic; which helps TREMENDOUSLY. And again, I’m not gonna share my partner’s mosaic, but I’ll share mine: Again, if you click on the Mosaic, you’ll be able to see my notes. This one is due to be mailed out by August 15th.

The last one I’ve mentioned previously; it’s the 4×5 modern bee; I’m actually a caretaker, as I’ve mentioned in my last post. Also if, you’ve read my last post, you’ll see that I designed my block for it. Well, today I decided to be proactive, and after doubling up my drawing in size and making tick marks and thinking hard, I finally figured out how to piece my block!

So, for the record, here’s what I learned:

The first two sides I added on are actually the left and right sides. I made the mistake of sewing my charcoal borders to the background fabric, which lead to the ends not being pointy like the top and bottom ones. For those, I sewed the charcoal to the Scheheradaze -the starburst looking fabric- and then added the background to that, which worked much better.

I need to measure a bit better; as you can see the borders aren’t 100% matched up perfectly. I contribute this to just poor planning on my end. When I make the blocks to send out to my hive, I will do a much better job of cutting the fabric.

The  larger triangles have the background sewn on them diagonally -with the exception of the left background triangle on the bottom- on the bias. While it looks pretty because of the way the fabric moves, doing this will cause problems when my hive members sew with them since the fabric stretches; they will have to do quite a bit of pinning to insure that the fabric does not move. I will have to cut these in the half square triangle way, versus what I did that results in essentially set in triangles; which is when you get four triangles out of a square instead of two like you do with the half square triangles.

Other than a few hiccups; the block came out pretty well! I know what I need to do better for the blocks I send out.. and even though this one has a few mistakes, I’m still pleased with how it came out. I’m planning to actually use this practice block on a tote bag or something similar. Either way, I’m not letting this one go to waste!

In case you are wondering, this fabric is from Lizzy House’s latest release called “1001 Peeps”. I LOVE this line of fabric. Heck, I just love her fabric in general!

Anyway, the 4×5 bee blocks are due to be sent out by October 15th, which is a while away. I will most definitely finish my other 3 swaps before I start crunching down and working on the bee blocks.